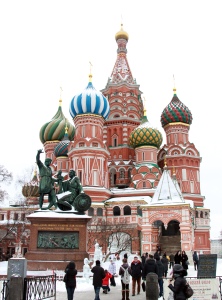 So, with that backdrop I tried to learn everything I could about the Soviet Union. I wanted to know why they thought the way they did. Why would a government oppress their people so badly? Why would people accept that kind of oppression. Why wouldn’t the Soviets want freedom. Why wouldn’t they do something about it? As the interest grew, I always thought that I would like to visit Russia some day.

Fast-forward to 2003 my wife and I were talking about adoption. After much research we decided to adopt a child from Russia. Because of that I kind of feel like we’re connected to Russia in some way. We also developed a love for orphaned children in Russia. As a result we have travel multiple time to Russia with a couple of different groups to provide love, compassion, and the Gospel to kids who have either have been abandoned or orphaned.

Up until now Christians from the west have been able to do it fairly freely. Most of you know that I work with Mission Network News. This week I did an interview that would break my heart.

On April 30, 2015 the United States Commission on International Religious Freedom issue their religious freedom report. For the first time in the history of the report (1998) RUSSIA was included in the report.

There are 10 on the Tier 2 list, including Russia. Mission Eurasia Director of Religious Freedom Issues, Wade Kusack, says Russia being on the list is a big deal. “This is a first official announcement, or recognition, of the persecution from the U.S. government’s side.”

What does this mean? This means that the severity of Russia’s persecution against Christians has reached a point where even government are paying attention. President Vladimir Putin has created legislation that has a direct impact on evangelical churches and para-church ministries. If they receive any funding from outside of Russia, the government considers them foreign agents. They’re basically calling them spies.

The situation that, I believe, tipped the scales was what’s happening in eastern-Ukraine. Kusack told me when Russian-back separatists occupied eastern Ukraine, the persecution began. “[They] started to hunt evangelicals, confiscate church buildings, kidnap and torture Christian leaders, and some of them were tortured to death.”

If you’ve studied Russian history at all you know that just about the time things were going well, they self-destruct. Look it up for yourself.

Why am I blogging about this? Because I want people to pray. There are many evangelical Christians who are actively involved in Russian government. Pray that God will allow them to use their influence to make a difference. Also, pray God would do a work in President Putin’s heart. He’s obviously being more aggressive on the international stage. He’s sending nuclear capable aircraft into American and European airspace, he’s bend on invading Ukraine and other form Soviet Bloc nations, and he’s making friends with Iran, North Korea and China.

But, God is also doing an incredible work in the hearts of people in both Ukraine and Russia.

If you’d like to know more about what’s going on there, go to MissionNews.org.

This site uses Akismet to reduce spam. Learn how your comment data is processed.